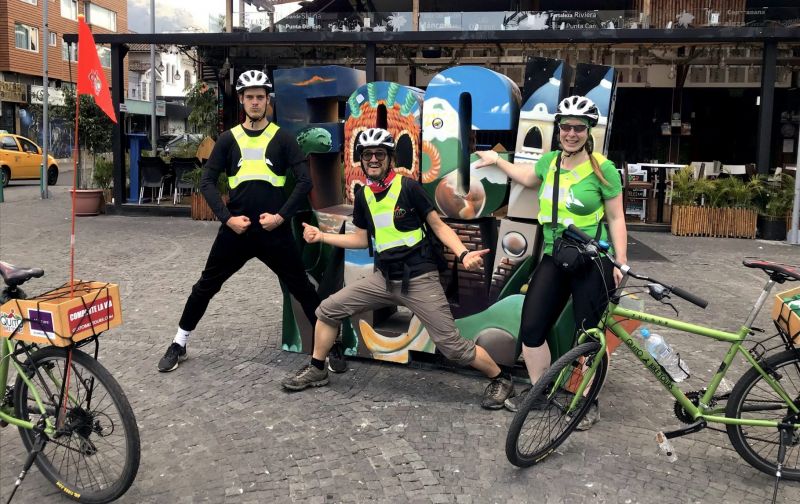 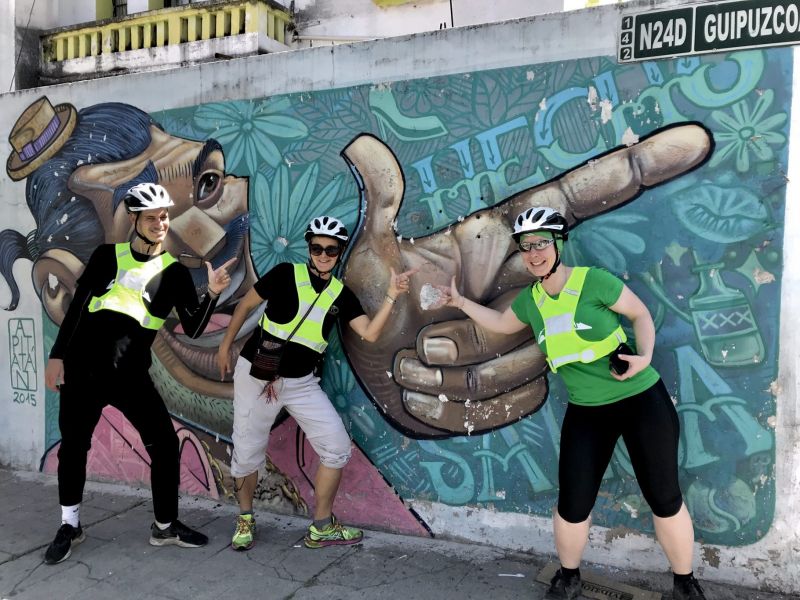 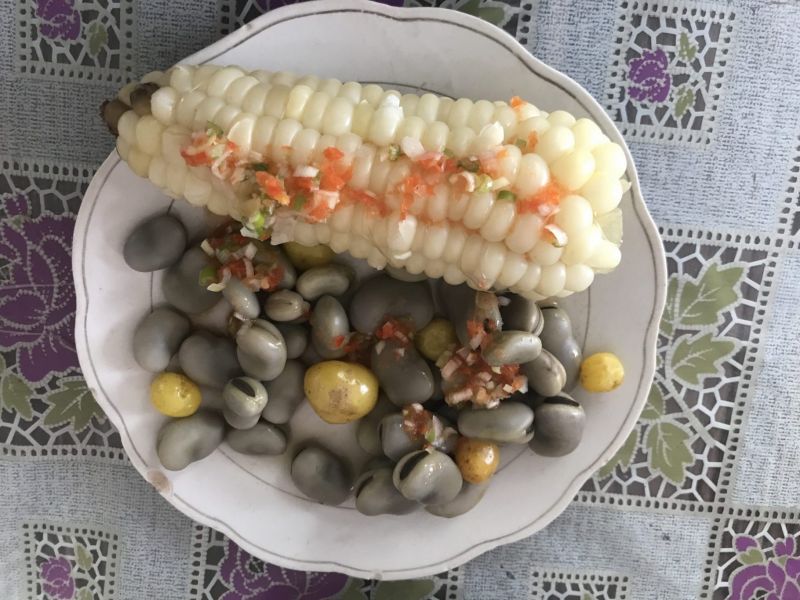 A LITTLE TASTE OF ECUADORIAN CUSINE 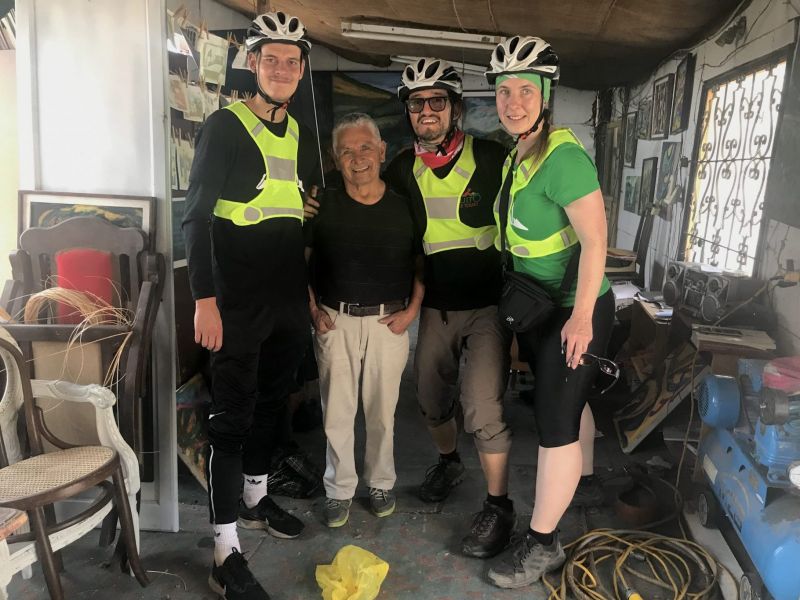 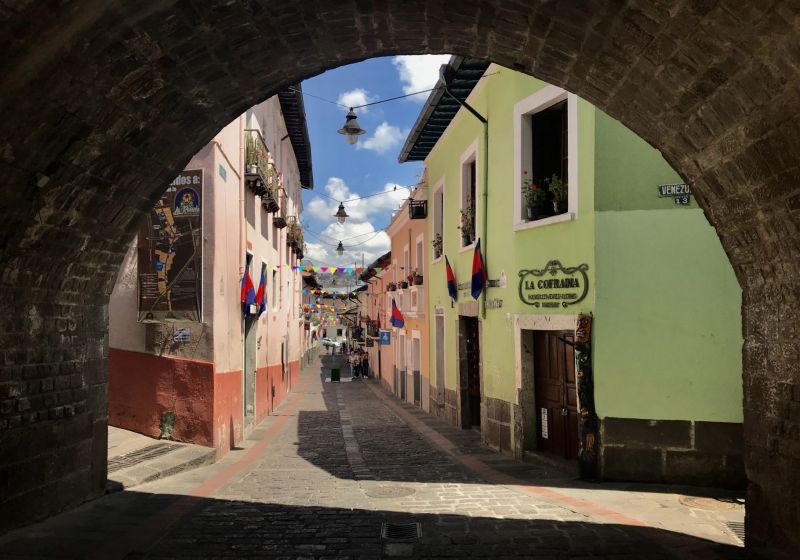 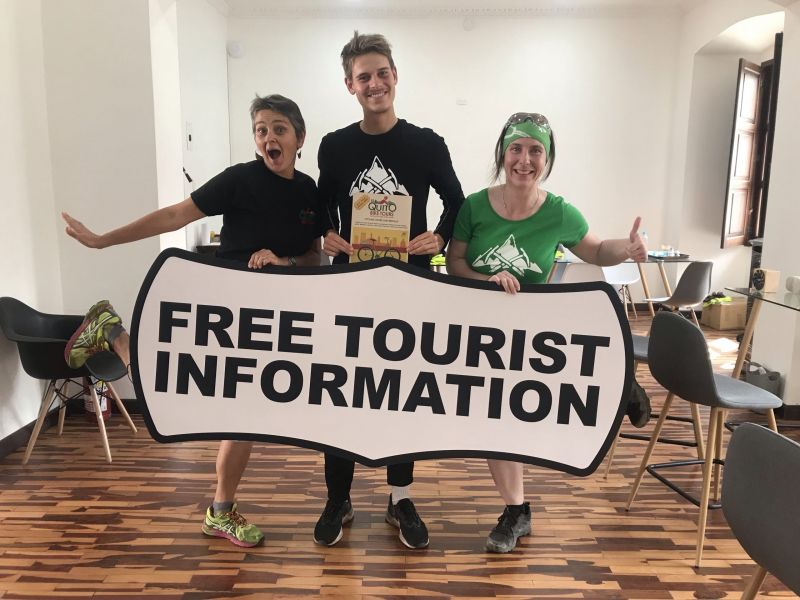 After a phenomenal JIZO hike experience to the peak of Ruco Pichincha (reaching 4700 above sea level), Alex & Ombi joined friends in Quito again and wanted to share this new JIZO adventure with us.

Although a little tired from the hike, we were determined to show our friends Elisabeth and Andreas what Quito looks like on a bike. Sound like a poet, don’t I!

TIME TO SHOW YOU AROUND!
At 9.00 am we were ready to show Andreas and Elisabeth Quito on a bike! Bike, check! Helmet, check! Safety briefing, check! Let’s go!

Our first moves were in the ‘hood of La Floresta. As usual, we began at the Ocho y Medio Arthouse Cinema, which opened in 2001. It’s both an Ecuadorian as well as a Quito institution and its amazing director, Mariana Andrade, has worked hard to make it so. She also helped ensure a public bench was erected outside, despite the protestations of many. For heaven’s sake, it’s taking up the space of cars! The area is full of color and ‘yarn bombing’. A group of women gather every Friday to knit and crochet. Many consider the cinema and its surrounds to be the epicenter of La Floresta.

VISITING HIP NEIGHBORHOODS
In recent years La Floresta has become known as Quito’s most hip and bohemian neighborhood. It’s a place where actors, writers, academics, university students, hipsters, cool kids, and just about anybody wants to hang out in. Oh, and people who want to do a bike tour with a twist! Due to its popularity, there are even a couple of walking tours. It really has a funky vibe!

It is full of restaurants, top-quality cafes and vegan and vegetarian eateries. There is something for all in La Floresta.

Our guests saw the iconic street art of Apitatan, who is now somewhat of a national institution. We also visited the workshop of an artist/ carpenter/ restorer who has lived in the area for almost 50 years. Meeting the locals is always the highlight of any tour.

FAMOUS ECUADORIAN CHOCOLATE
Did you know that Ecuador is famous for its chocolate? It is world-renowned for its top-quality cacao. We visited the Pacari Chocolate ‘factory’ where you can try a multitude of chocolate flavors. These included many that you’ve probably never even heard of. Coffee, chilli, maca, uvilla (goldenberry), fig, lemongrass and arandano or Andean blueberry, only to name a few. Then there’s raw 70%, 85% and 100% pure. Of course, you can buy them too! Tempted?

CHECKING OUT PARKS, STREET ART AND OLD NEIGHBORHOODS
Moving along on this relaxed Saturday morning, we made our way through both El Ejido and Alameda Parks. They are two of Quito’s bigger and more popular parks. On the weekend, both offer insights into how the locals live. They are also places that travelers and tourists like to explore. El Ejido is full of vendors selling handicrafts and food. You can also see comedians and actors doing their thing as well as people playing different sports. Many are just chilling with their families.

Alameda Park has a spiral tower called El Churo, from where you can see the beginning of the historical centre. It’s also home to the Quito Astronomical Observatory. Founded in 1873, it is one of the oldest observatories in South America. There is also a small lake, where families gather to have fun.

At the top end of the park is an imposing statue of the liberator, Simon Bolivar. This Venezuelan military and political leader is infamous all over South America. He was instrumental in helping Latin American countries achieve independence from the Spanish Empire. During his lifetime, he helped Venezuela, Colombia, Ecuador, Peru and Bolivia to achieve independence. Ecuador achieved independence in 1822.

QUITO'S UNESCO HISTORICAL CENTRE
Time to cycle and check out the historical centre. Quito’s historical centre was the first city in the world to be declared a UNESCO World Heritage site in 1978. It is considered to be the best-preserved historical centre in Latin America. There is so much to see and do from gold-encrusted churches to chocolate tasting to beautifully cobblestoned plazas, or squares. The historical centre alone is worth a day of wandering, wondering and taking a peek into the many eye-catching colonial buildings.

We also visited the infamous street known as La Ronda. The long curving street has quickly become one of the city’s most popular tourist attractions and with its fascinating history, rightly so. Located between Venezuela and Pedro Vicente Maldonado streets, its origins date back to the time of the Incas.
After the Spanish conquest, centuries later, residential and commercial construction of La Ronda began. In the late 19th century, La Ronda began to develop its reputation as a bohemian barrio or zone. As Quito and La Ronda gradually depopulated, it was later settled by drug dealers, criminals, and the homeless. In the late 20th century, however, a movement began to restore La Ronda. Today, the lantern-lit streets and floral balconies enhance the now romantic ambience. The street is now one of the crown jewels of Quiteño culture. A series of doorways open up to a courtyard and multiple art galleries, museums, craft shops and elegant restaurants.

WRAPPING UP A GREAT TOUR
What a day! We finished up in the historical centre’s Plaza de San Francisco. Here we had the chance to relax and chat about the day and what we saw and learnt. I am pretty sure that our friends Andreas and Elisabeth had as much fun with us as we had with them hiking Ruco Pichincha. Quito is a place to be both admired and explored. There really is something for every one!

FACTS ‘N’ OTHER USEFUL STUFF
Capital City of Ecuador: Quito
Country Population: 17.6 Million
Official Language: Spanish. Ecuador also recognizes, encourages and protects 14 indigenous languages, nationalities and peoples in its Constitution.
Currency: USD
Acclimatization: At 2867 meters above sea level, Quito is one of the highest capital on earth. When you arrive, you may experience some symptoms of altitude sickness like a headache, tiredness or nausea. In more severe cases even vomiting. Take the first few days nice and easy. Keep hydrated, rest, do not go to bed too late and eat lighter meals.
Transport: Buses and electric buses are cheap and plentiful in and around Quito. Taxis and Ubers also abound and are reasonably priced. If using a taxi, always ask that they use the taximeter.

JIZO is your best travel partner to discover the world and make new friends!